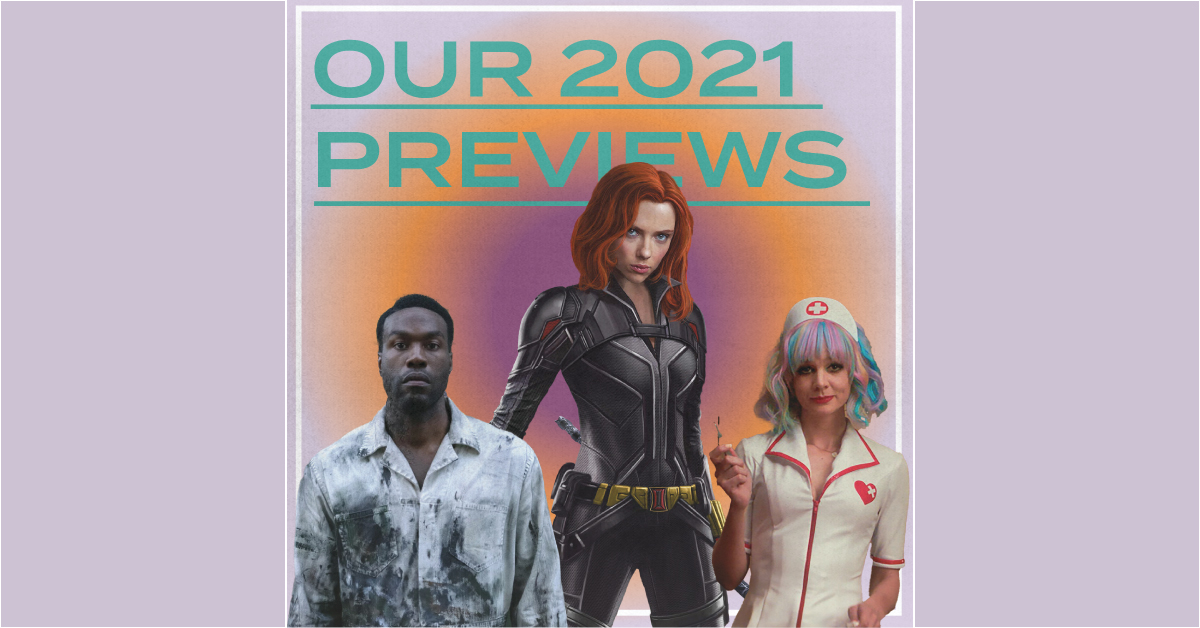 By Sabrina SeraniJanuary 5, 2021No Comments

After nearly a year of lockdown, binge-watching has firmly rooted itself as the new American pastime. While I’m still trying to catch up with 2020’s latest Netflix drops (Bridgerton is nothing but a delight), we’re already looking ahead to the most exciting movie and TV releases, especially ones that are led, written, directed, and produced by women.

If you love revenge fantasies…

Carey Mulligan has influenced me to go blonde and chop my hair into a pixie cut — admittedly more than once. So when I heard about Promising Young Woman’s premiere at Sundance in January 2020, directed by Emerald Fennell and starring Bo Burnham and my erstwhile hair (and life) inspiration Carey Mulligan, I was ready to claim it as one of my favorites without even seeing it. And then COVID bumped its April 2020 theatrical release. It was officially released in theaters late last year but we’re still waiting for a digital release, which should hopefully be coming soon. The film follows Cassie, a medical school dropout who leads a double life taking revenge on men. It also stars Jennifer Coolidge, Laverne Cox, Connie Britton, and Alison Brie. Digital release TBD.

File this one under perfect casting. Kate McKinnon plays the medical tech startup entrepreneur (and scam artist) Elizabeth Holmes in this drama series based on the 2019 podcast that outlined Holmes’s rise and demise. The show will be produced by Rebecca Jarvis, Taylor Dunn, and Victoria Thompson, the same women that produced the podcast. Not much is known about the release or the other stars, but I’d watch 10 episodes of Kate McKinnon breathing and be happy about it. Hulu release TBD.

If you love long-form Vanity Fair and The Cut articles…

Inventing Anna is a fictionalized series following the infamous fake heiress Anna Delvey (real name Anna Sorokin) who conned restaurants, hotels, and friends out of more than $200,000. The show is based on real-life accounts, like the 2018 The Cut article by Jessica Pressler and the 2018 Vanity Fair article and 2019 memoir by Rachel DeLoache Williams. The Anna Delvey saga has been one of my favorite scandals of the past few years, so I have high hopes for the show. Inventing Anna was created and produced by none other than Shonda Rhimes (Grey’s Anatomy, Scandal, and How to Get Away with Murder) so you can almost guarantee it’s going to be amazing. It stars Julia Garner, Anna Chlumsky, Katie Lowes, Laverne Cox, Anders Holm, and Anna Deavere Smith. Netflix release TBD.

If you’ve been waiting for the next season…

Apparently, the season three finale of The Handmaid’s Tale was only in August of 2019. I’m pretty sure IMDb is lying to me because I swear it was about five years ago, but whatever they say. Season three left us on a cliffhanger with (spoiler alert!) June bleeding out after smuggling children out of Gilead and into Canada. The upcoming season is only going to be 10 episodes instead of the usual 13 and will continue the drama from last season while introducing some new faces. Hulu release TBD.

If you’re into badass female superheroes…

After COVID-related setbacks had this movie slated for a Disney+ digital release, it’s been pushed back again and is aiming for a theatrical release this spring. Black Widow, starring Scarlett Johansson and Florence Pugh, will be the first film in Marvel’s phase four and the first Marvel Cinematic Universe (MCU) film with a female lead. Expect action sequences that will make you want to learn martial arts. IMAX release May 7.

A spin-off TV show of the MCU, WandaVision centers on Wanda Maximoff/Scarlet Witch and Vision who are living an idealized suburban life but realize that everything is not as it seems. WandaVision also stars Teyonah Parris, Kathryn Hahn, Kat Dennings, and Randall Park. Disney+ release January 15.

If you’re into horror movies with meaning…

If you didn’t see the absolutely chilling teaser trailer for Candyman, directed by Nia DaCosta and cowritten and coproduced by Jordan Peele, please watch it midday so as to not prevent you from sleeping. A direct sequel of the 1992 original, Candyman is in the vein of horror movies with a conscience like Peele’s Get Out and Us. Candyman stars Yahya Abdul-Mateen II and Teyonah Parris. Theatrical release August 27.

If you love generational family drama…

Whether it be from the comfort of your couch or the silver screen, happy viewing!