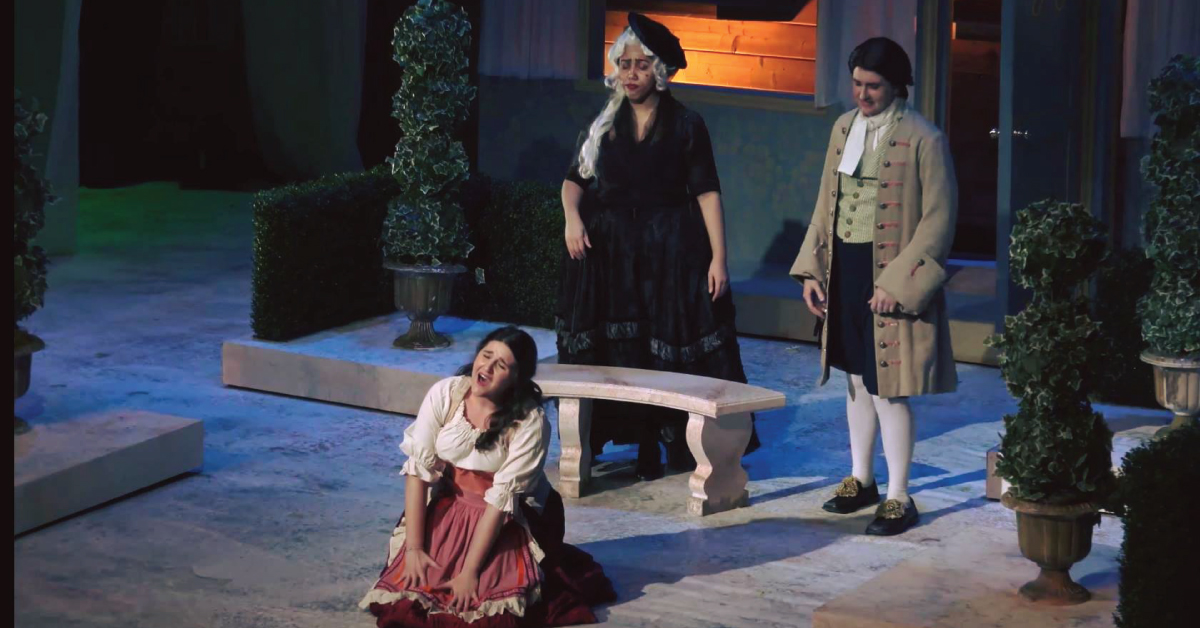 Using Your Voice: A Conversation with Singer Alessia Santoro

By Sabrina SeraniJanuary 11, 2021No Comments

Using Your Voice: A Conversation with Singer Alessia Santoro

The word “opera” probably conjures up images of rich old people in suits and gowns with tiny little glasses falling asleep to some woman singing in a language they can’t understand. For Alessia Santoro, though, this couldn’t be farther from the truth.

As one of my oldest friends, I remember Alessia learning to play Evanescence songs on her keyboard when we were preteens; now, at 25, she’s performed at Carnegie Hall and Lincoln Center. Here, I talk to her about how she got her start in opera and what the landscape of live performance will look like in a post-COVID world.

How did you get into singing, particularly opera? What is your training and background in music?

I’ve always been into singing and performing ever since I was little. Growing up, I mostly sang in choirs – middle school and high school and NJ Regional and All-State choirs – and additionally performed in a couple of high school musicals. I had also always loved listening to opera (or classical music in general), but developing a passion for singing, it came in much later once I started studying music in college.

I never really had much training, but I did take voice lessons for a few months in my senior year of high school to prepare for college auditions. I then went to Mason Gross School of the Arts at Rutgers and got my bachelor’s degree in vocal performance.

What are the main differences between singing contemporary music and opera?

I’ve performed some contemporary music on occasions before, and from what I’ve experienced, I’d say that it’s more casual. With contemporary music, there are a lot more electronic sounds or equipment involved. As for opera, it is on the more formal side. Instrument-wise, electronic or synthetic music isn’t really used. The voice is accompanied by either a piano, an orchestra, or a small instrumental ensemble. One additional difference is that contemporary music uses microphones a lot more, whereas opera does not use them as much.

What is your favorite part about performing?

What I love most about performing is being on the stage and feeling the music. It gives me this sense of freedom and happiness, and I feel a rush of adrenaline.

What have been some of your most memorable experiences?

One of the most exciting moments I’ve had was performing my first role as Barbarina in The Marriage of Figaro in college. To be cast as a mainstage role was like a dream come true. Another memorable experience I had was performing at Carnegie Hall for the first time. To be more specific, this was in Weill Recital Hall, but I hope to perform in the Stern Auditorium someday. A third one I’d list down would be when I sang at Lincoln Center’s Mostly Mozart Festival. I did this choir piece composed of several large choirs combined together. We were supposed to perform outside in Central Park, but we ended up performing in a cathedral instead because it rained on the day of the concert. And despite the location change, it came out incredibly.

I’ve often found myself working with people older than me. On some occasions, however, I have been in productions with musicians my age. I haven’t had the experience of where I’ve felt discounted for my age or gender, though.

Did COVID change what performing looked like for you?

Absolutely, especially when quarantine started. Artist programs that I was applying for ended up getting canceled or postponed. I was also supposed to sing in this concert that my friend in NYC was hosting, and she had to cancel it because COVID had started growing severely in the area. Eventually, people started doing virtual concerts or performances on Zoom, which I also did a couple of times. Once quarantine lifted, live performances were primarily done outdoors.

Although live performances have been a lot rarer (especially nowadays since it’s been too cold to perform outside), I have been able to get by with some church jobs. I currently sing as a cantor, section lead a choir, and occasionally make some audio recordings for virtual services.

Do you think that the landscape of live performance will make a comeback once COVID improves? Do you think there will be any permanent changes to how we see live music?

Yes, I think so, although it [will] be a slow process for everything to get back to normal. Wearing masks and maintaining social distancing [will] certainly be a long term thing, of course. As for permanent changes, though, the only thing I can possibly think of [will] be continuing with the social distancing.

Want To Get More Involved?

If you want to support the arts at this difficult time, you can:

This interview has been edited for clarity.