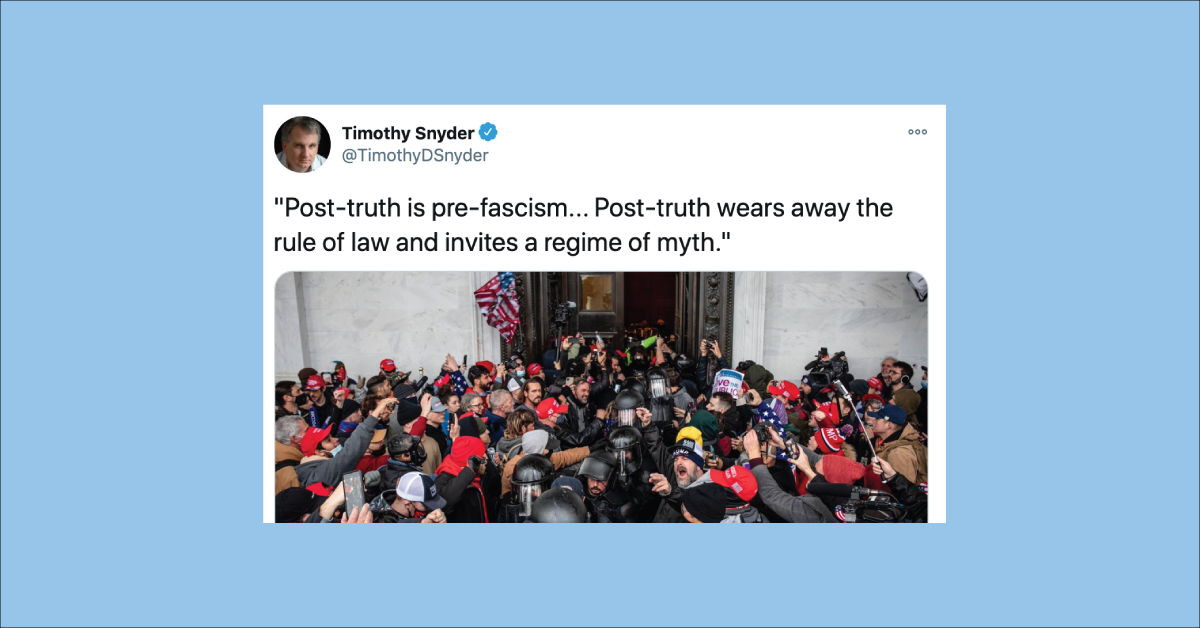 The Delicacy of Democracy

The Delicacy of Democracy

“ The Founding Fathers tried to protect us from the threat they knew, the tyranny that overcame ancient democracy. Today, our political order faces new threats, not unlike the totalitarianism of the twentieth century. We are no wiser than the Europeans who saw democracy yield to fascism, Nazism, or communism. Our one advantage is that we might learn from their experience.”

On Wednesday, January 6, 2021, white supremacists stormed the United States Capitol amid congressional assembly to certify electoral votes to confirm Joe Biden as the president-elect of the United States of America. As a result, these domestic terrorists successfully disrupted the diplomatic process, five people were killed, and American democracy will never be the same.

Our 243-year-old democracy has seen 44 peaceful transitions of presidential power, and just weeks before we are to embark on the 45th—the streak has ended. What we witnessed was not protest, it was an outright attempt to overthrow our democratic institution—it was a coup. There is now a moment in history where a large group of people organized to derail (although unsuccessfully) more than 200 years of democracy in the United States of America, a “poster child” for democratic process.

This moment is not surprising. We can look as far back as the establishment of this nation and understand that the foundation on which it stands is a wavering one. We can look back to 1989, when Trump took out a full page newspaper ad calling for the execution of the Central Park Five. We can look as recently as 2012, when Trump insisted he had credible proof that President Barack Obama was not born in the United States. His aggressive speculations and dismissal of facts were the seedlings of red flags, which over the course of the next several years would grow into full-blown blaring sirens.

In 2015 Donald J. Trump announced his candidacy to become the 45th President of the United States of America, and instead of reacting with concern, much of the country reacted in comedic disbelief. We treated it as a joke and witnessed the media leverage his campaign as entertainment and tool for ratings. Some people opted out and decided not to vote, others voted for him to prove a point, and some voted for him because they genuinely supported his candidacy. Even after publicly suggesting a “Muslim ban,” even after saying, “grab em’ by the pussy,” and even after saying, “I could stand in the middle of Fifth Avenue and shoot somebody, and I wouldn’t lose any voters,” people still casted their ballots, while other stayed at home in moral protest, leaving the state of the nation and democracy into the power-hungry palms of a demagogue. We did not acknowledge the outcry from Black, Brown, and Indigenous people of color, nor did we heed the warnings of historians and political experts. Despite these warnings, elected republican leaders and officials rallied behind their nominated president, leveraging the notion of representing the people in which they serve and dismissing their vow to serve their country above anything else—all to secure the most powerful seat in D.C. The warning signs were clear, and because of this, we cannot claim hindsight is 20/20. In the last five years, we witnessed elected officials both enable and dismiss Trump’s behavior in favor of saving their own seats to maintain their grip on power. Instead of choosing duty to one’s country, they chose party and played politics. Look at what it cost us. We can only blame the complacency that is American exceptionalism.

It is without a doubt that the sum of Trump’s actions and rhetoric which spewed from the oval like molten lava lead to the eruption of insurrection in the Capitol. And now, a man deemed too dangerous for Twitter holds the nuclear codes. There is no questioning the dangers of a Trump Presidency.

While I sincerely doubt this is to be the case, let’s entertain the idea that Trump may not have been fully aware of his influence. And granted I am no mind reader, I can only speculate his intentions for his reactionary and formal concession. Did his conscience emerge? Did he believe that this indeed has gone too far? Was it empathy for the death of some of his supporters? Was it fear of impeachment, and thus not being able to run again in 2024? Was it the unbearable loss of his precious Twitter account? I couldn’t tell you. But the fact that he not only allowed such events to transpire—but encouraged them, is only further proof that he was never fit for office in the first place.

America looks upon other countries like Haiti, El Salvador (or as Trump refers to as “shit hole” countries) with judgment, and questions as to why it is so difficult for their political institutions to maintain stability. Never acknowledging 1. the role in which our nation plays in the instability of other governments, and 2. failing to recognize how susceptible any country is to the possibility of becoming a failed state.

I am not surprised at what unfolded at the Capitol. It is merely a result of a nation built on a foundation of theft, slavery, and genocide. This is a result of a nation that refuses to confront, correct, reconcile its past and present sins. It is a climatic cumulation of what has ensued over the last decade.

I know that I am not alone in this disappointment. Even among my feelings of disdain for the present state of this country, I still find remnants of hope. I wish what happened at the Capitol never occurred, but I hope that this serves as a lesson for all of us—American and neighbors abroad—how difficult and remarkable it is for the American experiment to have maintained stability for over two centuries. Moreover, how fragile it is to have the ability to deteriorate into alternative chaos.

As I write this, I grieve knowing our tradition of peaceful transition has been broken. I am uneasy at the prospect of what is to come next. I do not know what the future of our country looks like as we move forward. What I do know? Democracy is delicate. It is not to be toyed with. It is not a game. We all have a role to play in maintaining its integrity.

Democracy may not have fallen on January 6th, but this insurrection has changed America forever. And as we have witnessed Congress request Trump’s immediate resignation as they motion for impeachment for the second time—I hope they are successful. Not to spite Trump or those that support him, but for the sake of due process, our democracy, this country, and the prospect that we can actually become a nation that believes in liberty and justice for everyone. So come January 20th, regardless of personal feelings toward the incoming administration, I hope that as Americans we will put aside fidelity to political affiliation and choose the commonwealth of this nation and together welcome not just a new president, but inaugurate restoration to our republic.

What You Can Do 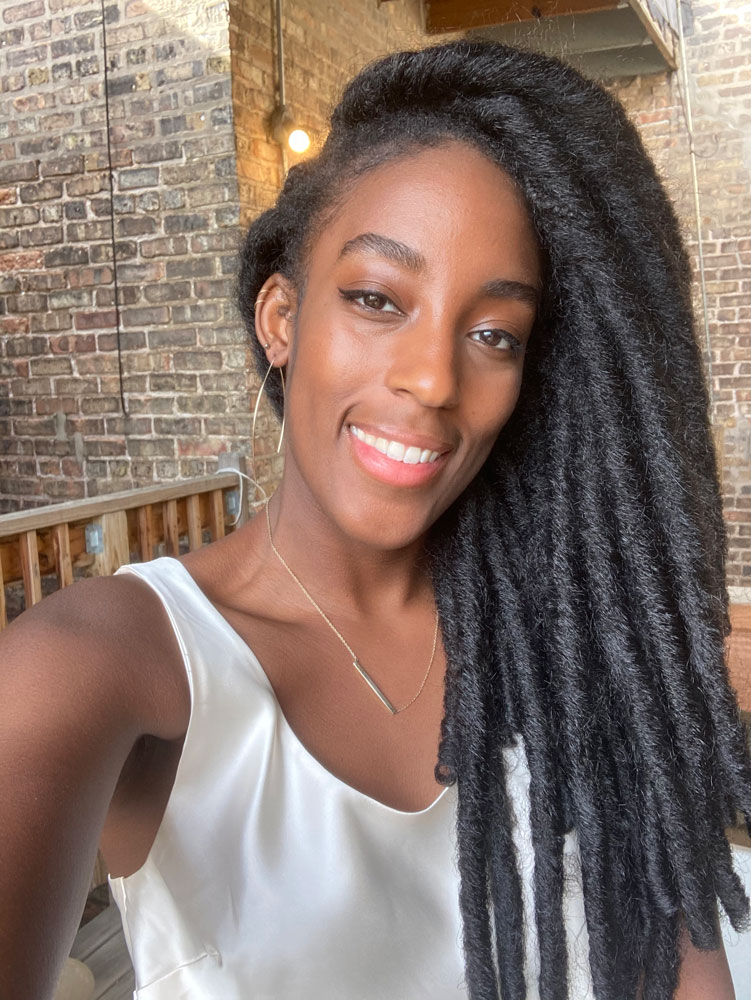