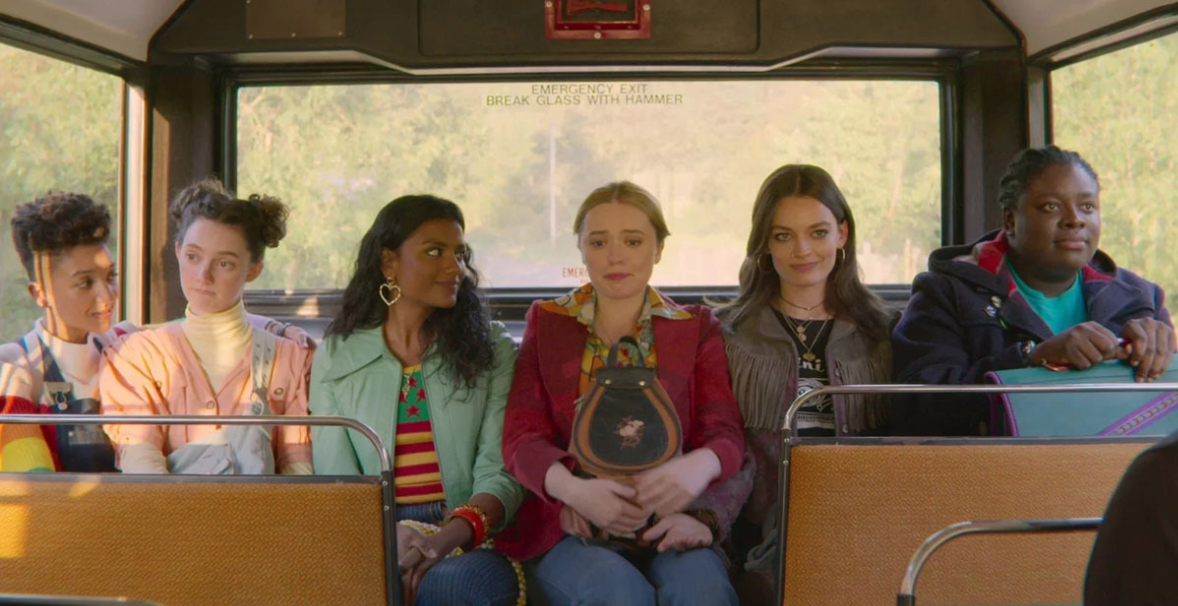 By Winnie Brandfield-HarveyFebruary 11, 2021No Comments

Valentine’s Day is a holiday centered around romantic partners, filled with kiss shaped candies and heart shaped Hallmark cards. Love is on full display, often to a mawkish, commercial amount, but we shouldn’t forget that some of the greatest love stories are platonic ones. Here’s some female friendships I wish I could third wheel on February 14th:

The series finale of Comedy Central’s Broad City offers some of the show’s most sentimental scenes, if not the most. Season 5, Episode 10 is centered around Abbi’s departure for an art fellowship in Colorado, while Ilana stays behind in New York City. The entire episode is the last line of the long, queer, weed-scented, subway-ride-sweaty love letter written across five seasons between these two best friends. They seem to make even the worst of days look like a spontaneous, hilarious adventure. For these two young women in their 20s, everything seems to go wrong, whether it’s a forgotten passport, a job loss, a condom loss, a breakup, a break-in; but, their obsession with and commitment to each other allows them to withstand every fork (or street rat) in the road. It’s why, somehow, in the end, the ball always still feels like it’s rolling in the right direction.

This episode is no different, as even though they are parting ways diegetically and with the show itself, they know it is the right move for both of them. In this adventure, they have to go it alone. On the Brooklyn Bridge, while reminiscing on their friendship, Ilana tells Abbi: “I’ve never felt so cool…really cool, not as when I’m with you.” Then, in typical Ilana fashion, she dramatically runs away. And in the real goodbye, when Abbi is finally getting in a taxi to the airport, she turns to Ilana tearfully: “I don’t even think I was alive before I met you.” The ingredients seem simple and yet you can’t help but think how incredibly lucky and rare it is, in life, in a city of millions, to meet someone who makes you feel like you stand out. That is to say, I cried too. 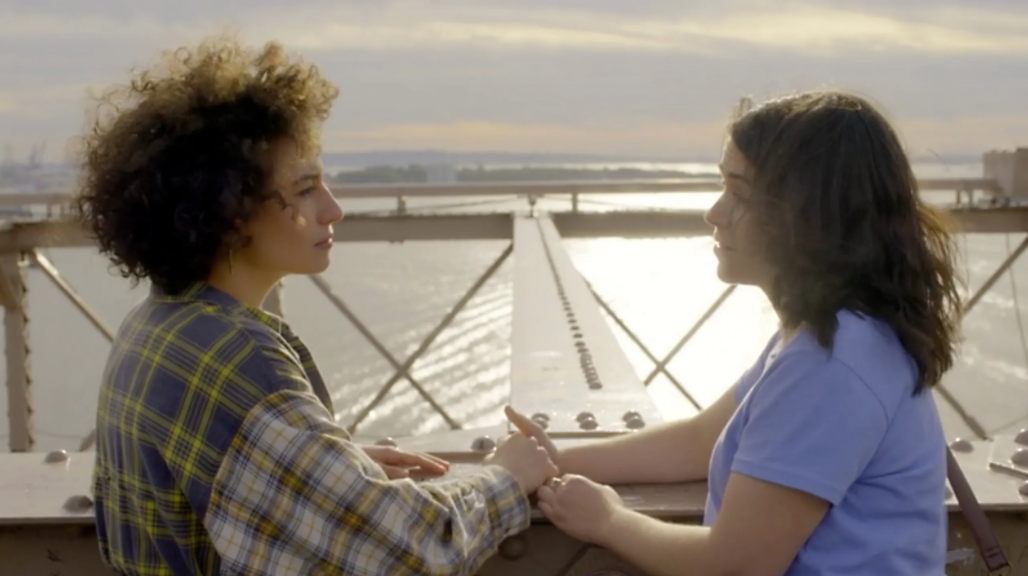 In Season 2 of Netflix’s Sex Education, the character Aimee, a sprightly, head-in-the-clouds type who sees the best in people, receives a developing storyline surrounding her sexual assault. It starts at the beginning of the season when she boards a bus and smiles at the man next to her, however, suddenly upon looking back, she notices he has exposed himself and ejaculated onto her jeans. She shrugs it off at first, going reluctantly with her friend, Maeve, who urges her to go to the police station to report what Aimee deems just a stain on her pants. Over time though, we see Aimee endure a range of consequential triggers: seeing the strange man’s face in crowds, shoving her boyfriend away when he tries to touch her, walking miles to school instead of riding the bus. With every episode, little things chip away at Aimee to reveal the gradual severity of what happened and what it did to her. While she was once sunny and bright, she loses her head in some pretty dark clouds.

In Season 2, Episode 7, Aimee finally breaks down in a burst of tears in a room full of her female classmates and they each share and commiserate in their own experiences with assault. At the end of the episode, when Aimee approaches the bus stop, mustering up the courage to take back this part of her life, she is surprised to find all her classmates waiting for her. They all board and seat themselves at the back, serving almost as a force field around Aimee who remains in the middle. As the camera pans out, facing the rear, it reveals an empowering still of a row of girls from various backgrounds, cliques, colors, sizes, and vaginas alike finding their own strength in the presence of one another. “It’s just a stupid bus,” Maeve says encouragingly. Aimee nods. “It’s just a stupid bus.”

Fleabag is known for many iconic scenes such as the dinner in Season 2 Episode 1 or even the erotic opening of the series premiere. In Season 1 Episode 5, on the anniversary of their mother’s death, Fleabag and her sister, Claire, begrudgingly attend lunch at the home of their father and tiresome Godmother. These kinds of get-togethers never go swimmingly, large due in part to Godmother’s constant jabs at Fleabag, and this episode might be her harshest punch. At the table, Godmother speaks ill of Fleabag’s deceased best friend, Boo, and Claire takes small glances at her sister, revealing she knows what’s being said is purposely tactless. Later, Fleabag pushes Godmother when she insults her birth mother, and Godmother slaps her in response. At the end of the episode, as Claire and Fleabag leave, Claire reveals she has stolen the notorious gold, nude statue from their Godmother’s studio, Fleabag’s ongoing prank throughout the series. The mature, straight-laced, pencil skirt wearing Claire rebels against her own nature to cheer up her black sheep sister who finds joy in Claire’s rare flirtations with mischief. She has her sister’s back.

In this ending scene, there’s a pivotal intimacy between these rather estranged siblings who are so often like oil and vinegar that they aren’t capable of fully completing even just an awkward hug. It’s a way of saying “I love you” without having to force these emotions-averse characters into spitting out the actual words. With pun intended, it is a stolen moment, in the midst of grief, sex, inappropriate jokes, excruciating family reunions, in which these women finally see each other as friends. “I don’t just love you, I like you.” And while, in the following episode, plans go awry and promises aren’t kept, there’s something so infinite, for me, about this exchange. After their mother died, they both shoved things deep down and bolted the door. In this scene, it seems, for once, they have allowed one another to come inside (Fleabag smirks sexually at the camera).

Maya’s shame not only inhibits her from accepting herself but also from telling her uber-codependent-basically married-best friend, Anna, with whom she has no secrets. Toward the end, when she finally tells Anna what has been going on with her, she hangs her head in tears, confessing: “I’m like Sam, only I’m grosser because I’m a girl and I’m a pervert and I really shouldn’t be doing what I’m doing.” In immediate solidarity, Anna confesses that she does something similar too in bed to feel good and when Maya asks if she feels gross, Anna replies: “How gross can I feel if you do it too.” There are so many things girls have to learn about their bodies as they grow, and it can get lonely because you think you are just an alien stuck in this unknown territory. At such an age, in the horror show that is middle school, there’s a hope of survival by having a BFF who is in it too, by your side. It’s enough to know you are going to be ok. 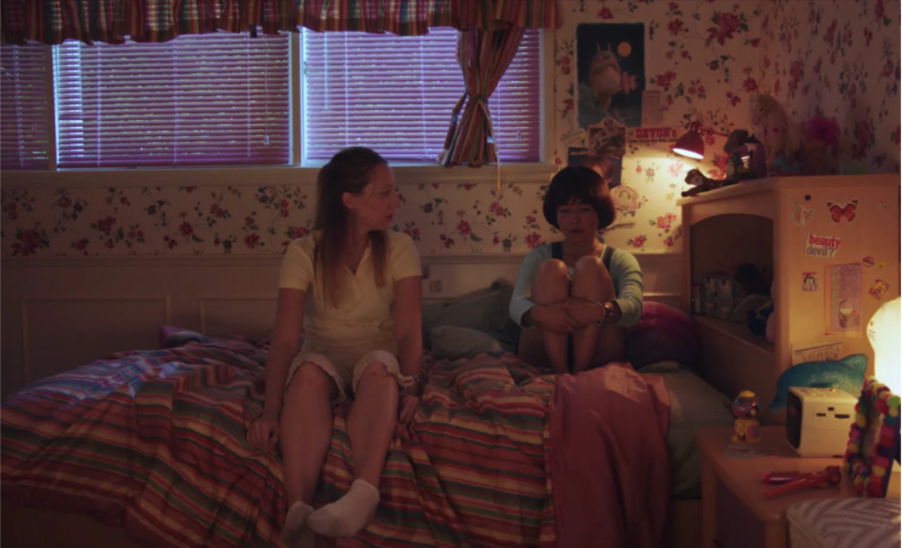 In this episode of New Girl, Jess has only 20 minutes to decide whether to take a job at a museum or follow her calling into another teaching position. This is a stressful time as Jess gets way too emotionally attached to every option in every decision. She goes to her male roommates for advice and they each recount their own career paths. Winston suffered a severe injury in a professional basketball game and later joined a radio show. Nick quit law school to be a bartender after one magical night serving behind the bar. Schmidt went from candy striper to Christmas tree seller to his long-term goal of a rich man in a suit. And Coach, well he just started coaching and it clicked. The men are convinced they are living large yet each offer entirely unhelpful advice such as Nick telling her to reminisce on her first student who they later find out grew up to be a criminal. Luckily, Cece swoops in to save the day with two minutes left on the clock.

Cece reminds Jess that she was, in fact, her first student and we are taken to a flashback. Young Jess approaches a teary-eyed Cece, in the library, who can’t seem to read or understand the book she is reading. She also later confesses that her dad just died which reveals why she may have been sad. Jess comforts her by showing her the trick she uses when she loses her glasses. As Jess lowers her head and brings her eyes super close to the page, Cece first looks around in embarrassment and when asked to join, Cece says “But everyone will laugh at us.” Jess steals her dad’s words in response: “They can drive it or milk it as far as I’m concerned.” Cece finally leans in too and they each laugh together, introducing themselves to one another. Back to the present, when the phone call finally comes, Jess takes the teaching job. In an overwhelming sea of possibilities and regrets, her best friend helps steer her in the direction she needs to go. It is such a tender moment showing that from their very first meeting as kids, they have always been there for one another no matter what. 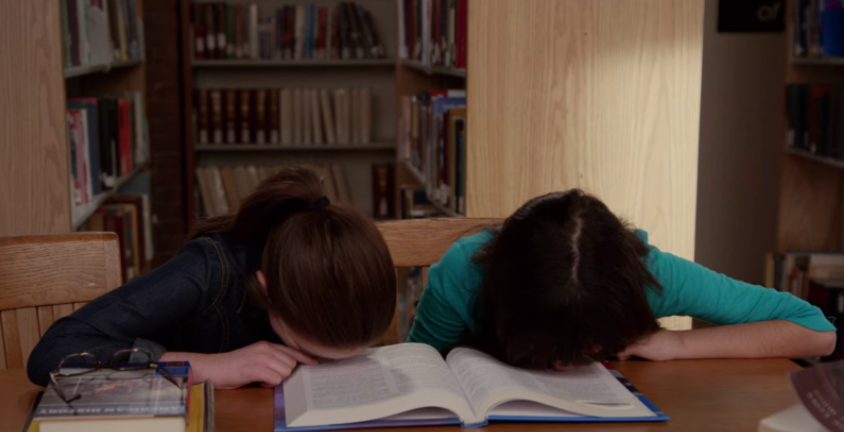