By Winnie Brandfield-HarveyJanuary 24, 2021No Comments

On January 20th, Inauguration Day 2021, my roommate and I wrapped ourselves in a blanket, put out some popcorn, and spent the day on the couch oohing and aahing at everything and every person at the White House. Well, except for the occasional shots of Mike Pence and Mitch McConnell. As former President (that feels good to say) Donald Trump finally packed up and left and Joe Biden and Kamala Harris pulled up, it felt like a dark cloud had finally vanished from above and some sanity was restored to the nation.

Now while there are important matters to discuss, laws to be repealed and signed, and promises to be carried out by the new President and VP, we need to take a second to highlight one of the overlooked pillars of democracy: fashion. Here are five outfits from Inauguration Day that stole the show:

Vice President Kamala Harris’ step-daughter, Ella Emhoff, is no stranger to the fashion industry. She is a current student at Parson School of Design in New York City and has her own shop on Instagram where she accepts commissions for her own knitwear, such as crocheted hats, pants, and tank tops. She walked in like a Gossip Girl character from Brooklyn, sporting the artsy, eccentric vibe in an embellished tweed Miu Miu coat, black leather headband, and circular wired glasses. If you didn’t know who she was before, you certainly know now. 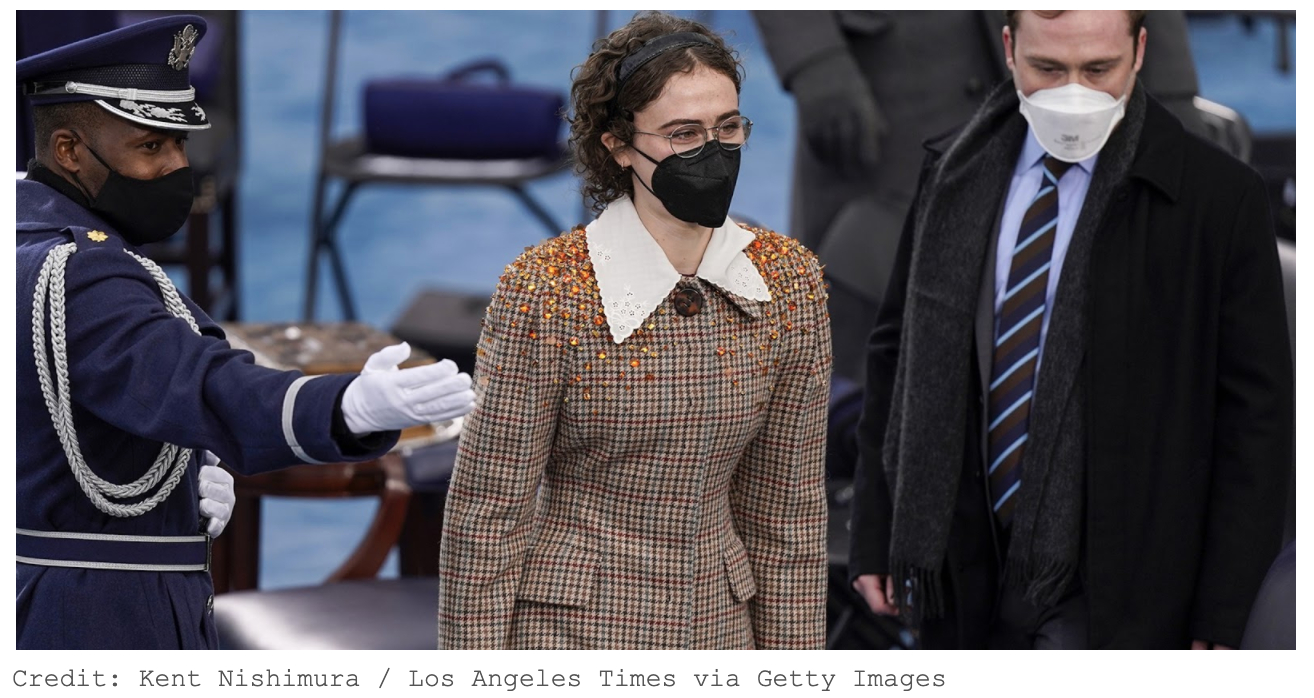 As for Michelle Obama, she needs no introduction nor an explanation. She makes every list. To begin with, her hair was stunning. One curl from her voluminous, perfectly swung bangs could and should have its own Twitter account. The Former First Lady turned heads with her chic monochrome look from head to toe, and gold glistening gold belt. Her magenta turtleneck tucked into wide-leg trousers proves what we all already know about her: she is always dressed for success but also ready to get down to business at any moment. Hell, she could run a 5k in that outfit and not break a sweat. 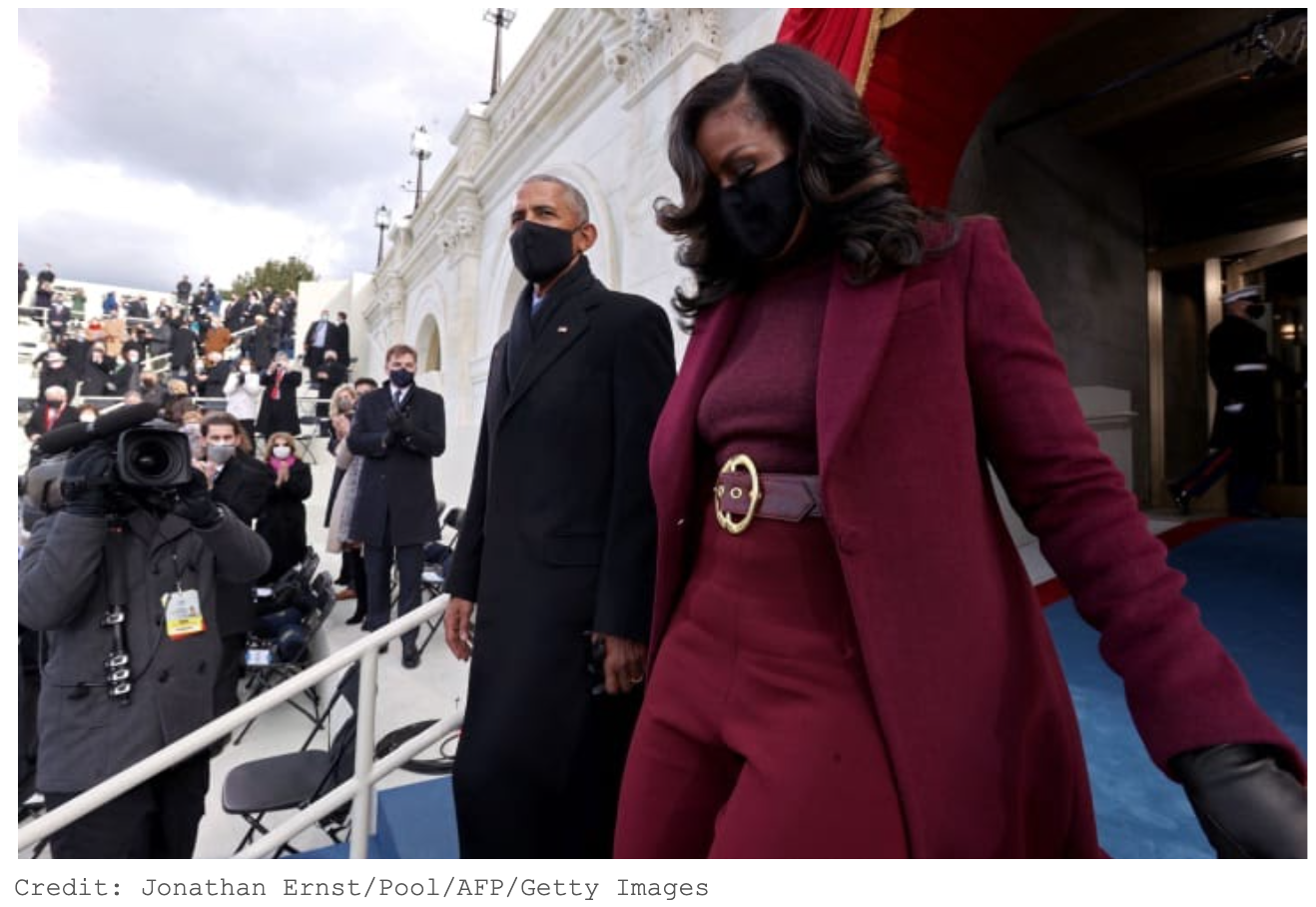 Lady Gaga is known for her highly unconventional, internet-breaking outfits—and that is why we love her. Though she was only on-screen for a few minutes, the iconic artist made sure to make a statement. As she sang the “Star-Spangled Banner,” her outfit mimicked the patriotic sentiment: a billowing long red gown, a soldier-fit navy sweater, and a beautiful gold dove brooch that stretched across her chest. Gaga tweeted that the symbol of the dove represents an “olive branch” and the hope that we “may all make peace with each other.” As always, we all went gaga over Gaga. 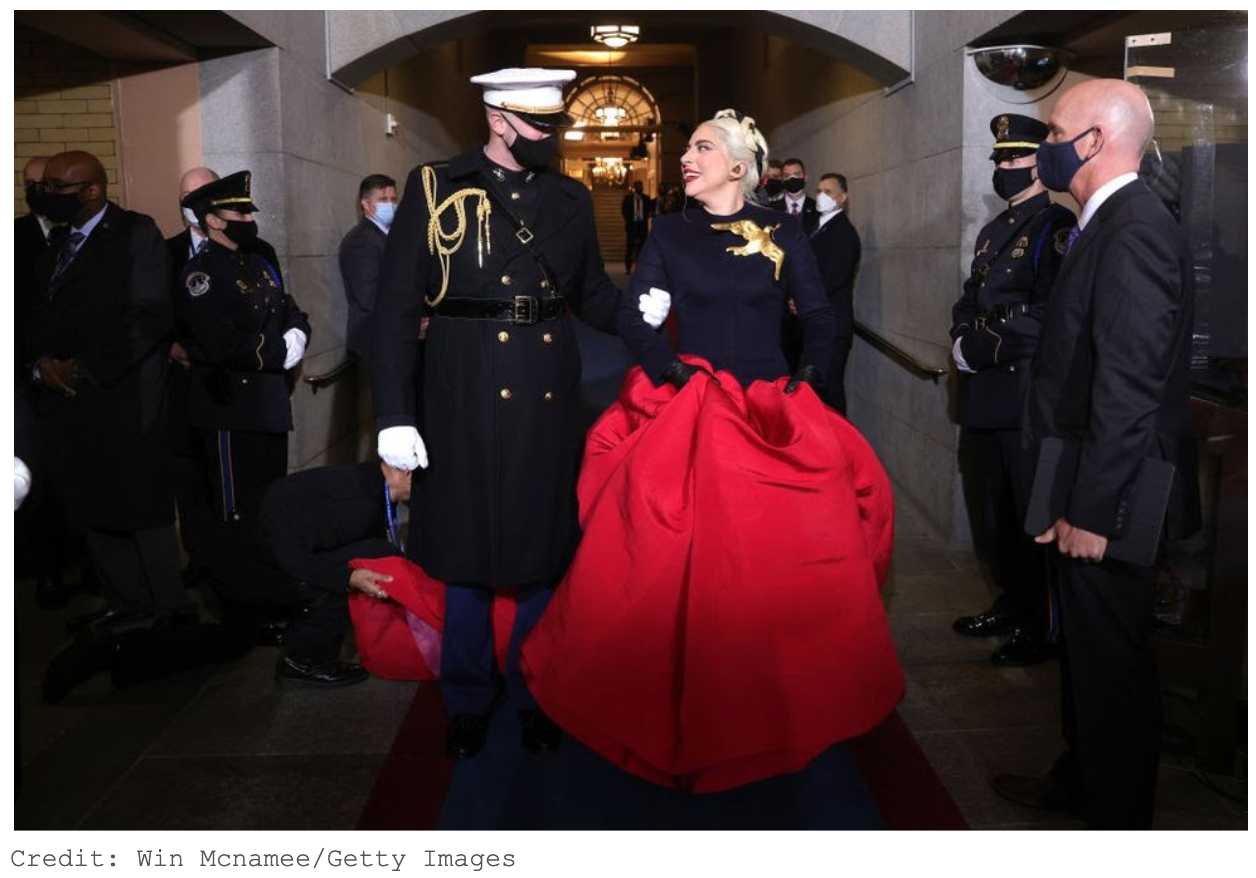 Following Gaga’s performance, the audience fell into a trance, mesmerized by Amanda Gorman’s words. It seemed the whole world went quiet during her poetry reading. The 22 year-old National Youth Poet Laureate said out with the old and in with the new and she did in style no less, with hopeful primary colors. Her bright red headband sat on her head like a crown as the queen that she is and her yellow peacoat shined bright in unison with her parting lines; “For there is always light/ if only we’re brave enough to see it/ if only we’re brave enough to be it.” At the ripe age of 23, I can’t help but wonder if I will ever be that cool. 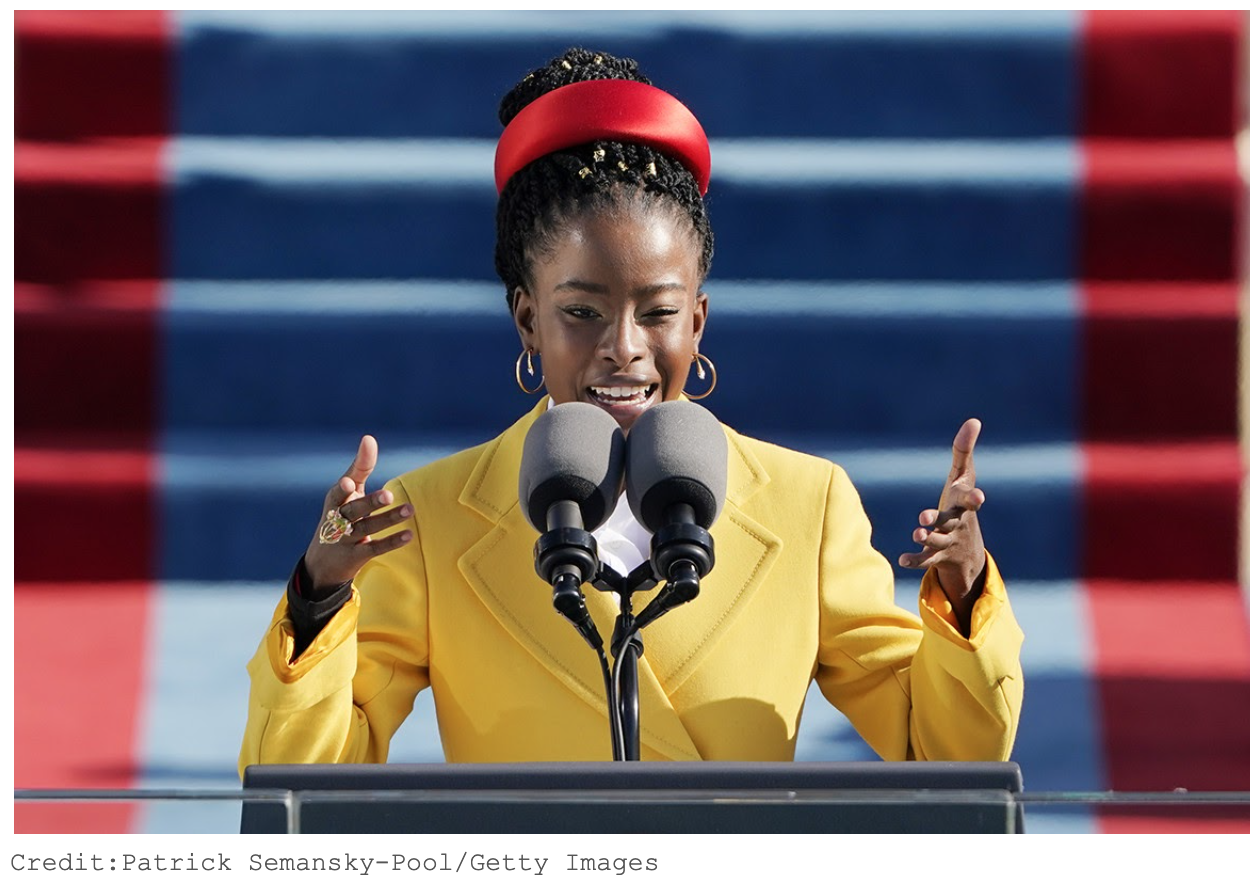 Finally, in an unexpected twist, Bernie Sanders was one of the stars of the day doing what he does best: speaking for the masses. No designer. No fancy jewels. No flash or flair. The Senator wore a dull brown winter coat, homemade Vermont knitted mittens, and a standard surgical mask. It is very likely we all own some version of what he was wearing. There is a comical comfort in his sensible and relatable outfit among the glitz and glam of the others. It was just another casual work day in the life of Sanders, but while he might have come in as a politician, he left as a viral meme.  He is, once again, a man of the people. 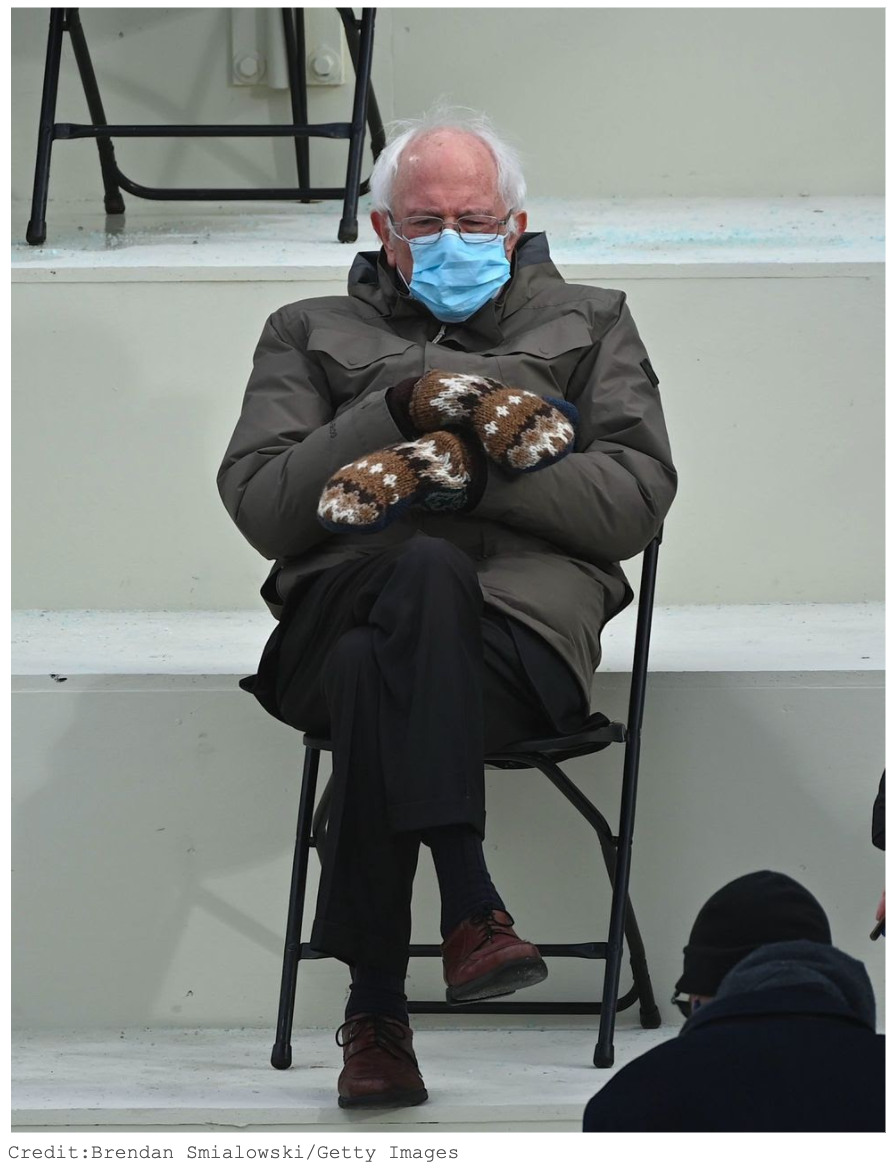