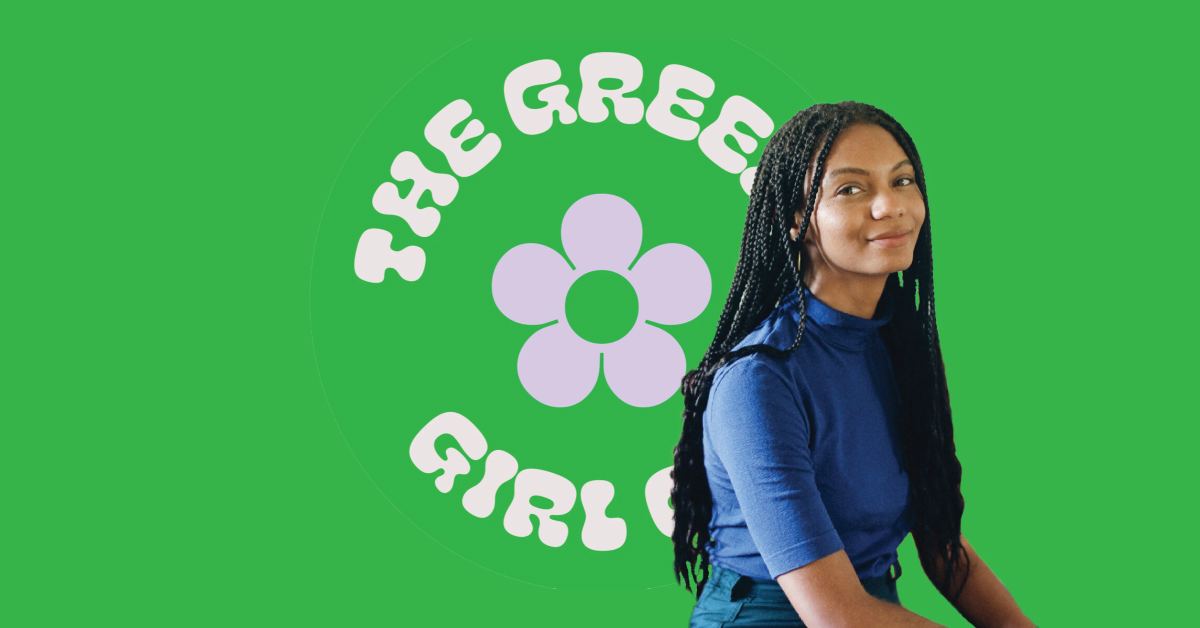 By Alicia BriggsMarch 3, 2021No Comments

If you haven’t heard of Leah Thomas yet, get ready to be impressed. Thomas recently took social media by a storm with her popular and informative Instagram content. Her activism and writing have reached the masses and led to the creation of her educational and environmental platform, Intersectional Environmentalist, her podcast, Dismantled, and her own e-commerce business, The Greens Girl Collective.

Still in her twenties, it’s hard to imagine what other great things Ms.Thomas will achieve in the next decade. I don’t doubt that she’ll be a major household name soon enough.

Who Is Green Girl Leah?

A self titled eco-communicator, Leah is a writer and environmental activist from Ventura, California. Her work began to take off when she started exploring the connection between social justice and environmentalism. Her personal instagram, @greengirlleah, is more than just an average account. She uses it to discuss all things environmental and lifestyle, her recent writings, and Instagram Lives (like speaking with the white house climate advisor, NBD).

Thomas found her passion early, having studied environmental science and worked with Patagonia and The National Park Service before she decided to pursue environmentalism and activism full time.

What Inspired Her Work?

The main spark for her activism came after the Ferguson riots in 2014. As she states in an interview with Vogue, “…I was on break from college in my hometown of Florissant, Missouri, when Michael Brown, an unarmed Black teenager, was shot at least six times by a police officer before dying in the street just a few miles from my house. His body lay there uncovered for hours as the community tried to piece together what happened without communication from authorities. Tension boiled over, and uprisings followed.

Then I had to go back to Southern California to continue on with my environmental science and policy degree. Spending time in nature during the Ferguson uprisings helped me process the trauma of what was happening back home, yet I felt guilty at the same time…Why was I entitled to clean air, water, and abundant nature in Orange County when communities like Ferguson around the country were not, both during times of unrest and beyond?”

This experience launched Leah into her work as she began to uncover the relationship between social and environmental justice. She wrote, “The more I learned about different cultures and religions — while diving deep into my own Black identity and womanhood — I realized the social justice and environmental movements I advocated for didn’t need to be siloed into their own categories. They overlapped and intersected, which made me realize the theory of intersectionality could be applied to environmentalism in similar ways.”

Leah discovered that her personal experience was backed up by hard data and that communities of color were the most affected by bad environmental conditions and poor air quality. “An EPA report from 2018 revealed that Black Americans are more likely to live near landfills and industrial plants. As a result, a majority of Americans living near hazardous waste are people of color, and Black Americans are three times more likely to die from exposure to air pollutants than their white counterparts,” she wrotes in Elle.

“I realized my work could directly contribute to the fight against racism. The systems of oppression that have led to the deaths of so many Black people were the same systems that perpetuated environmental injustice,” she continued. “This realization pointed me to the term ‘intersectional environmentalism,’ and compelled me to introduce it into environmentalist dialogue—to spark conversation and mobilize the environmental community to be anti-racist and not complicit.”

What is Intersectional Environmentalism?

Intersectional theory, coined by Kimberlé Capshaw, looks at understanding the factors and challenges that influence how we navigate the world. It helps us understand how identities like race, gender, etc., intersect to create our privileges and prejudices. “As a Black woman, I’m unable to separate my two identities or ignore the ways they intersect. Considering these intersections isn’t about overcomplicating social justice movements, but instead making them more inclusive of all people, ”Leah states in the previously mentioned Vogue interview.

She went on to apply this framework to environmental justice. She defines Intersectional Environmentalism as, “An inclusive version of environmentalism that advocates for both the protection of people and the planet. It identifies the ways in which injustices happening to marginalized communities and the earth are interconnected. It raises awareness for injustices committed toward our most vulnerable communities as well as the earth, and does not minimize or silence social inequality.”

Why Does it Matter?

If you consider yourself an environmentalist, you have to also fight for BIPOC justice because the two can’t be separated. As Leah stated, “The more I learned about environmental racism and injustice, and the disproportionate exposure of BIPOC communities to poor air quality, water quality, and lack of green spaces, the more I knew Intersectional Environmentalism needed to lead, and I knew it needed to happen now. The climate crisis is urgent, and low-income and BIPOC communities are likely to be exposed to its impacts the fastest and harshest.”

The intersectional environmentalism approach helps us address the most affected communities and teaches us how to create sustainable, lasting change both in environmentalism, racism and numerous other social issues. Leah continued to say,“I encourage environmentalists to no longer take a ‘color-blind’ approach to environmentalism and instead realize the ways privilege and prejudice have factored into environmental policies and decisions. People’s lives are at stake.”

“Following the murder of George Floyd,” IE.com states, “Leah called on the environmental community to make a pledge to Black lives and commit to a journey of intersectional advocacy that would amplify silenced voices.” Her Instagram post, “Environmentalists for Black Lives Matter,” went viral, thrusting Leah’s work into the mainstream spotlight.

The week following the post, Leah co-founded the Intersectional Environmentalist platform. Their mission is to, “address the unjust murders of Black lives and the silence from the environmental community; [they] are committed to amplifying the voices of all those fighting to uplift underserved communities, preserve cultures, + protect our planet.”

The Intersectional Environmentalist started a movement. It provides comprehensive educational resources, collaborative blog posts and merch offerings as well as resources to support sustainable, ethical, and BIPOC brands and businesses.

The latest project Leah has embarked on is the inspired creation of her e-commerce site, The Greens Girl Collective, in 2020. It advocates for another intersectional issue- Cannabis Equity, stating: “The cannabis space is notoriously inequitable and even though it’s becoming de-stigmatized and legalized in several states, without restorative justice and opportunity for Black, Latinx + Indigenous people – the industry will only continue this painful legacy.”

As cannabis continues to be legalized, there hasn’t been much reform for those currently incarcerated for Cannabis related crimes, who are disproportionately BIPOC. “There are over 40,000 people in prison for non-violent cannabis “crimes” and while 15.7 million people have been arrested for marijuana offenses in the last decade, over $10.4 billion has been earned in legalized states,” she states. “Regardless of anyone’s personal preference on the usage of cannabis, the inequity is clear.”

The Greens Girl Co. created the Cannabis Innovation Fund, to “provide funding for Black owned cannabis businesses, reform organizations and BIPOC with a cannabis business venture in need of funding.” You can nominate or apply for these grants on their website directly, with businesses awarded quarterly.

The Greens Girl Co. provides a comprehensive directory of BIPOC owned businesses in Cannabis, to support in the U.S. They also sell an artisan collection of pipes on the site, where 7% of the proceeds go back to the Cannabis Innovation Fund and Intersectional Environmentalism.