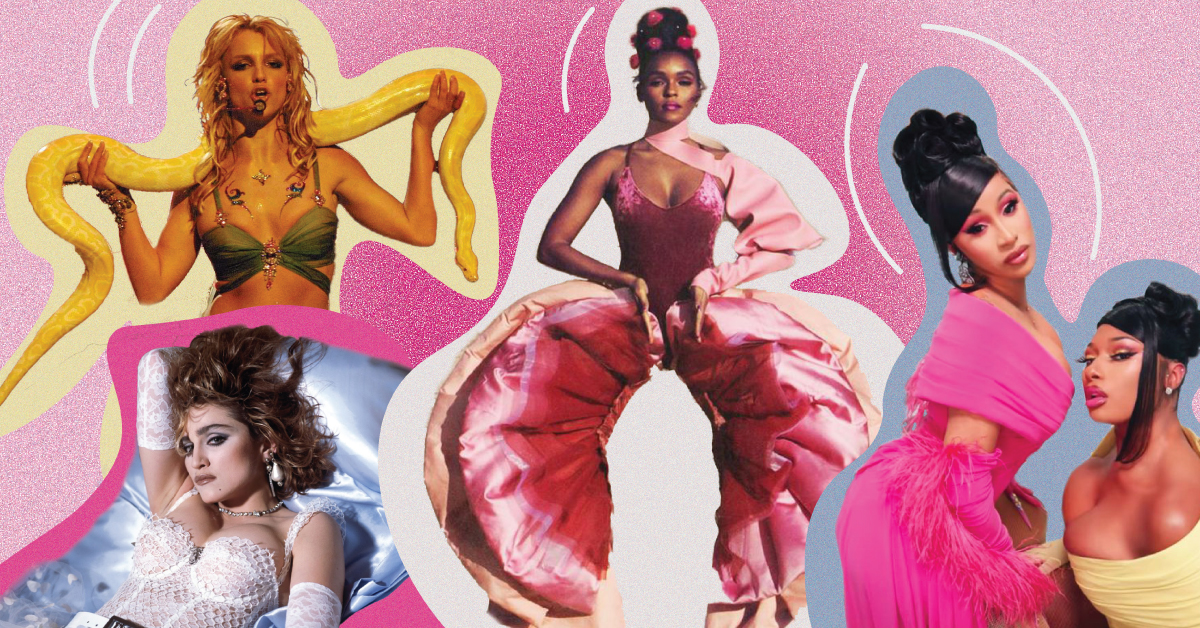 Female Sexuality in Pop Culture from Madonna to “WAP”

By Emily PowersDecember 3, 2020No Comments

Female Sexuality in Pop Culture from Madonna to “WAP”

The release of “WAP” by Cardi B and Megan Thee Stallion rocked all of our quarantine bubbles. From the rise in Big Mack Truck sales to your accountant Janet learning the dance in her living room, it’s hard to escape its influence. Perhaps the most enjoyable part of the song, besides the lyric “I let him taste it, now he diabetic,” has been the extreme panic it has caused in conservative men. My favorite reaction being this tweet from James P. Bradley, a Republican running for a Congressional seat in California. He writes, “The #WAP (which i heard accidentally) made me want to pour holy water in my ears and I feel sorry for future girls if this is their role model!” To that I say, I don’t really know how holy water works but I’m pretty sure it’s not supposed to be funneled into your ear like a botched ear candling. I would also love to know the context in which Jimmy “accidentally” heard what he calls “The #WAP” and whether or not it came on his Apple Music “For You” Playlist while driving his 2015 Buick Encore.

So for James P. Bradley and other men who feel freaked out by a wet ass pussy, this one’s for you. Take a deep breath, explicit female sexuality in popular music isn’t anything new. It’s storytime, Ebenezer Scrooge, let me take you on a magical trip through sexy ladies past.

A Pop Hits Playlist for Womxn Who Like Sex:

Although there were earlier displays of female sexuality in popular music (Blondie, Diana Ross, not to mention Chaka Khan’s “Tell Me Something Good,” which Glee probably ruined for you too), Madonna is perhaps the artist that commodified sexual rebellion. She broke many layers of what “appropriate sexuality in women” was supposed to be and hit a cultural reset button. Plus, bitch, she’s Madonna. Let me start where I want to start.

So, let’s break down arguably her biggest hit, “Like a Virgin.” The song itself is pretty mild, speaking mostly about falling in love with someone to the point of feeling as though you’ve never been touched before. (Sidenote to the young girls reading this: virginity is made up and not equated to worth. Read this). The music video shows Madonna wearing all white and pulling at some bed sheets while a lion prowls around Italy. However, the real iconic moment was not Madonna humping a gondola, but was her MTV VMA’s performance of the song, in which she seductively rolls on the stage. It may not feel like much nowadays, but Madonna flashing her garters and butt on live tv made a big ol’ fuss in the 80’s.

BEST LYRIC: “You made me feel shiny and new, like a virgin, touched for the very first time.”

BEST LYRIC: “When I think about you, I touch myself.”

I don’t really like this song, but the image of Britney Spears holding the snake is iconic, and I am no iconoclast. Britney Spears is rightfully the Princess of Pop. From her infamous red catsuit to her MTV kiss with Madonna, she is not one to shy away from spectacle. In fact, she’s a perfect example of the blurred line between what is entertainment that empowers women and entertainment that advertises to the male gaze at the expense of women. In a world of “sex sells,” it’s hard to draw that line, especially when historically men benefit heavily from the success of female artists. So, what’s the difference between selling sex and empowering your personhood through sexuality? Well, gosh. I’m no expert on sexuality nor do I speak for all women, but I would say let’s leave it up to how each individual person wants to express herself. Perhaps I’ll offer you this: it’s not our job, even as women, to monitor what is and isn’t a proper display of female sexuality. We rise by lifting, not shaming. So if your high school friend Laura’s theme song is Britney Spears’ “Work Bitch,” let her live.

If you don’t have a strong opinion about “I Kissed A Girl,” congrats—you’re probably straight. Katy Perry’s One of the Boys album was a defining moment of my life and probably for all the wrong reasons. “I Kissed A Girl” doesn’t really hold up today with the weird cheating connotations and the sensationalizing of queer love for profit. But hey, in 2008 you take what you can get.

BEST LYRIC: “Us girls we are so magical, soft skin, red lips so kissable.”

Oh, Miley. How could I make this list and not include you? This song is straight from the heart of Miley Cyrus’s rebellion from her Disney roots. And we are all the better for it.

Rihanna has not lied to us, I’m pretty sure that if you have sex with her, sex with anyone else would only feel alright. I don’t really know what else to say other than Rihanna deserves the clout.

BEST LYRICS: “Always wet a bitch never ever had to use lip gloss on it.”

A masterpiece. This song is a nod to Aerosmith’s “Pink,” which was a not so subtle ode to loving vaginas and in the top ten of twelve-year old Emily’s iPod “Most Played.” Like Madonna did thirty years ago, Janelle Monáe has set a new bar in empowering female sexuality. This song does not shock or objectify. It’s clearly for her. And for you. Not to mention the music video belongs in the MOMA.

Ah, we’ve reached the 2019 anthem for queer bottoms. King Princess has done a lot for the queer folks and lady lovers from her hit song “1950” to her ode to non-platonic female friendships, “Ain’t Together.” King Princess has given us queer love, queer heartbreak, and now: queer sex.

BEST LYRIC: “I don’t care if you degrade me, cuz after all you are my safety, and everything you touch just feels like yours to me.”

And that brings us back to the present. I’m not going to pretend like this is the first time a rapper has ever advocated for female pleasure, because that would be a disservice to Lil Kim. What I will say is, “WAP” is nasty. And it’s nasty in a great way. It’s descriptive and direct and too worried about speaking to the reality of female pleasure to care about how it will be perceived by men. Plus the lyrics are witty as fuck.

BEST LYRIC: “I let him taste it, now he diabetic.”

What a journey we’ve been through! I hope you’ve discovered the true meaning of Christmas. I’ll leave you with this: