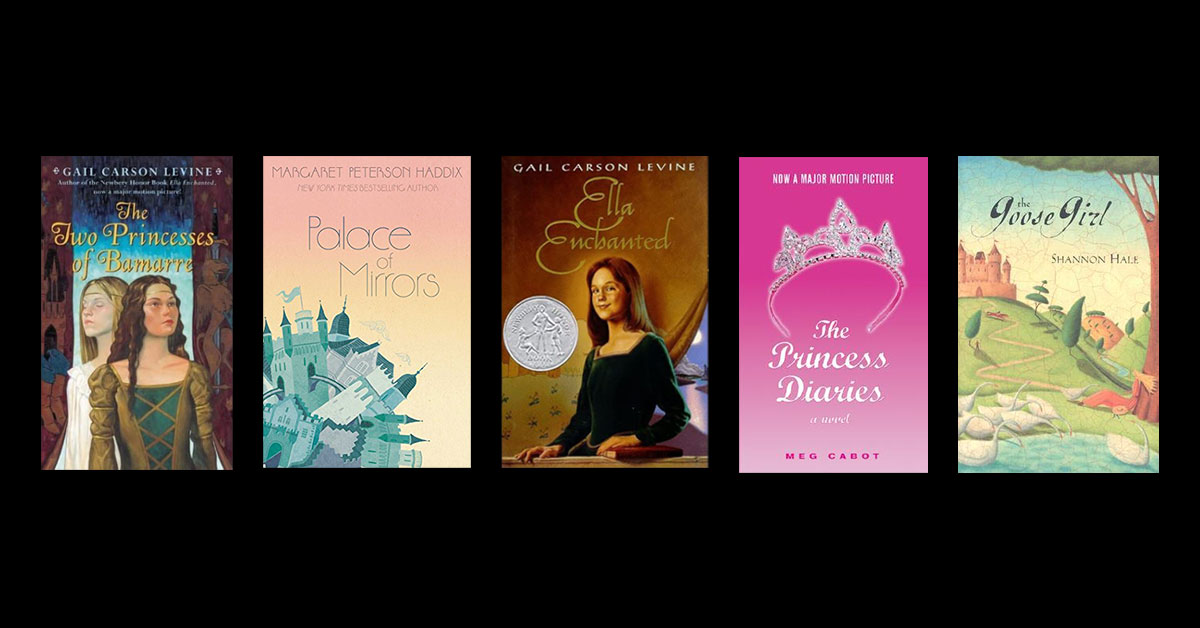 Most kids in the United States grow up watching Disney movies and listening to fairy tales. I was no different. Like many girls, I was always frustrated by the lack of agency the princesses had. Early childhood stories, consistent as they are with imparting morals, play a large role in educating children on acceptable and expected behavior. The moral of princess stories was always that girls should not instigate action but wait to be rescued.

When I began exploring my reading taste through primary school, I was drawn to fantasy books with female characters that were empowered and drove action. As I grew older, I carried these stories with me for their feminist spirit, which they instilled in me at a young age. Even now, I crack these books open when I am in need of a comforting and familiar friend. I hope you enjoy them too.

5. The Two Princesses of Bamarre by Gail Carson Levine

Before Frozen, there was The Two Princesses of Bamarre. With a dead mother and a distant father who bases every decision on a book of proverbs, princesses Meryl and Adelina (Addie, for short) have only each other. Bold Meryl and fearful Addie are polar opposites, but when the Gray Death plague suddenly strikes Meryl, Addie sets off to find the cure despite her fears. This is a story of sisterly love and courage in the face of a dangerous world.

Haddix is a well-known name in the world of YA science fiction and dystopian literature. I first encountered her in middle school with Running Out of Time (a Truman Show-like plot centered around an inhumane eugenics experiment). Palace of Mirrors holds up to Haddix’s standards of asking deeper questions. Cecilia has been told her entire life that she is the true princess, hiding in a tiny village as a commoner until it is safe to take back the throne from Desmia, who sits there now as a decoy. However, when she travels to the capital to confront Desmia, she discovers that Desmia believes herself to be the true princess. Haddix makes us question, what qualifies someone to be a leader? And what does it mean to govern as a woman?

Gail Carson Levine is an expert at taking a universally known story like Cinderella and putting her own twist on it to examine topics like free will, especially in the context of womanhood. In Levine’s version, Ella is the daughter of an opportunistic traveling merchant who remarries soon after Ella’s mother dies, leaving her in a house with no allies. Her greedy, vain stepfamily quickly discovers and takes advantage of Ella’s secret — that she is curse-bound to obey every order. If you like Ella Enchanted, I also recommend reading Fairest, which is set in the same world but retells the story of Snow White.

2. The Princess Diaries by Meg Cabot

The only book on this list set in the modern era, The Princess Diaries brings the genre out of the fantasy world and onto the streets of New York City. Mia Thermopolis, a high schooler with enough regular teenage problems of her own, learns that she is the princess of a small European principality called Genovia and must take princess lessons with her grandmother, the dowager princess. A classic coming-of-age story written after the cultural phenomenon of Princess Diana, this book highlights the influence a modern princess (with no real political power) can have by employing her social and cultural capital.

1. The Goose Girl by Shannon Hale (Also Read: The Books of Bayern Series)

I first read The Goose Girl in middle school and it has since remained one of my favorites. In this adaptation of another classic fairy tale, Hale tells the story of Princess Ani of Kildenree (later called “Isi”) who is married off to the prince of the neighboring kingdom of Bayern. Along the way, her lady-in-waiting usurps her throne with the backing of Isi’s own mutinous guards. Isi disguises herself as a farmhand in charge of pasturing the geese on Bayern’s castle grounds until she can reveal herself to be the true princess. This is a story of a girl who learns to empower herself through true friendship, strong will, and a growing ability to communicate with the wind. Once you finish this book, you’ll want to read the other three books in the Books of Bayern series.