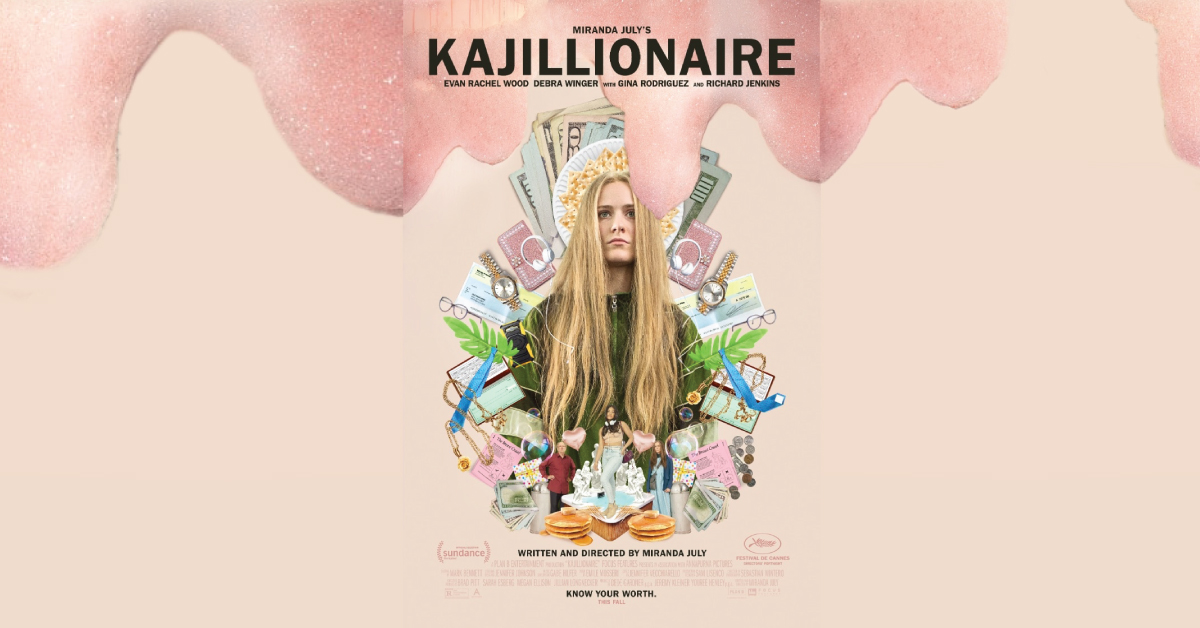 By Sophia MarusicNovember 27, 2020No Comments

A toss-away quip of Miranda July’s newest film Kajillionaire particularly resonates this year. In fact, the entire film, which explores the importance of intimacy and the ways we stave off loneliness, feels incredibly relevant in this time of quarantine.

This is my first encounter with July’s film work (I’ve read her fiction for years), but she has ample experience as a writer, director, and actress (Me and You and Everyone We Know (2005), The Future (2011)). In her body of work (art, film, and writing), she treads the line between tragedy and comedy with such skill that the line disappears altogether. Here is the absurdity in our suffering and our joy, her work seems to proclaim. Here is the absurdity in the ways we relate with one another.

Kajillionaire follows a family of scammers, though the word “family” seems to be a technicality here. Old Dolio (Evan Rachel Wood) is twenty-six years old and lives with her con artist parents, Robert and Theresa (played by Richard Jenkins and Debra Winger). A sense of family is defined only by blood, a shared estrangement from society, and a three-way split of their earnings. The earnings are small: twenty dollars at a time, gift certificates, sweepstakes entries, a single tie from a stolen package. July gives the audience very little backstory beyond showing the practiced and rhythmic way the family moves through the world. With their choreographed routines of dodging and flipping, it’s clear the Dyne family has always survived this way, and that’s all we need to know.

When we are introduced to the Dyne family, they are three months behind on rent and owe fifteen hundred dollars, which is ridiculously low, considering the precarious way they live. Old Dolio invents an insurance scam that will save the Dynes from eviction. During the con, normalcy is injected into the film in the form of Melanie (Gina Rodriguez), an effusively charming young woman who is sucked into the scheme by Robert and Theresa. It is through Melanie that Old Dolio begins to separate herself from her family, confused by and jealous of the fake affection her parents bestow on Melanie. For her entire life, Old Dolio’s parents have treated her like an equal, elevating the illusion of mutual respect and independence above a nurturing childhood. Old Dolio (her name itself a relic of a scam) is unkempt, averse to physical contact, and speaks monotonously and without feeling. The movie centers around her move towards independence and subsequent metamorphosis into someone who can want and feel love, even the most trivial kinds.

The Dyne family’s nebulous origins and strange lifestyle are supported by the surreal world July builds. Old Dolio and her parents live in a leaking office in a bubble factory and scoop foaming froth from their walls twice a day. Their bubble-making landlord (Mark Ivanir) nearly breaks down in tears every time he asks them for money. Much like the soapy bubbles themselves, these touches of whimsy soften the pervasive sadness and cruelty that underlies most of the scenes. They give us a reason to hope for Old Dolio — if this is the sort of absurd and sunshiny world that requires Bubbles, Inc., maybe this wild, unfeeling young woman has a chance at experiencing frivolous happiness.

So what’s up with the title? Robert, in one of his tirades against modern society, insists that everyone wants to be a “kajillionaire” these days, while he and Theresa are content to just “skim.” On the surface, skimming seems to be a rejection of a culture that prizes money above all else. However, the film reveals the Dynes as being the other side of the “kajillionaire” coin; Robert and Theresa raise Old Dolio to act solely in self-interest and prey upon human vulnerabilities for connection and meager economic rewards. A positive feedback loop develops between economic instability and aspiration, isolation, and human meanness, all lurking beneath the surface of the film’s rosy Los Angeles setting. In this way, July’s seemingly surreal world is motivated and haunted by the same things that make up our own, and the characters no longer seem too distant from our own lives.

But July does not let this sort of world proceed unpunished or without hope. Robert and Theresa’s manipulations of Old Dolio routinely trigger California earthquakes, suggesting that destroying a childhood has ramifications on a tectonic scale. They are terrified of “the Big One,” the earthquake that will finally bring everything crashing down. I won’t give away the ending, but amongst the metaphorical rubble, July provides hope for Old Dolio’s ultimate happiness with her deft navigation of female intimacy.

I am a huge Miranda July fan, but I especially loved this movie and would recommend it to anyone. July has insane levels of imagination that I’ve seen in few other artists. Also, the soundtrack features a tinny, cellphone version of Mr. Lonely that has been stuck in my head for days now. For a surreal film about human loneliness, I think it’s almost fitting to recreate the experience of a movie theater in your own home. So make a pillow fort, hide candy in your sleeve and sneak it into your living room, then stream Kajillionaire. Make the best out of, “Ha ha ha, cry cry cry.”